Just four of our many success stories. 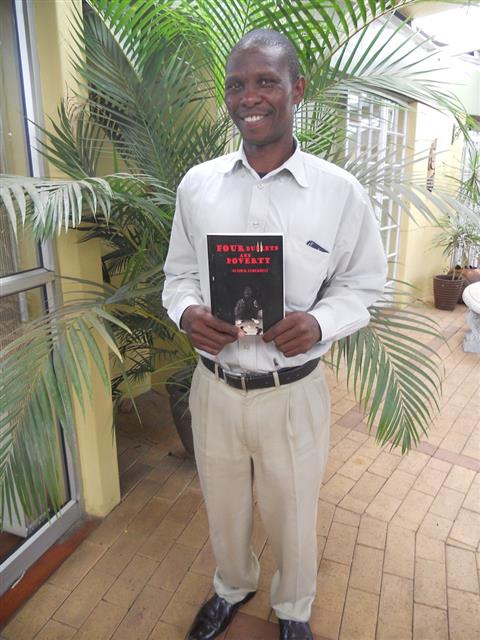 A quiet spoken, humble man dreamed of being an author. His dream began to take shape but this was only after spending 14 years in prison. He was released in 2011 and five years later his dream became a reality.

Whilst in prison he began to read anything he could lay his hands on. He wrote short stories and then began to write his story. He painstakingly, chapter by chapter, hand wrote out his autobiography, “Four Bullets and Poverty”.

After his release his father taught him carpentry and he slowly began to turn his life around. However, being a published author was his dream and his passion.

Then, in 2013, while a passenger in a taxi in Empangeni he spotted a sign on a building, “Zikulise Entrepreneur and Skills Training Centre”. Why he stopped in his tracks, immediately getting out of the taxi and going into the building to find out what it was all about, he doesn’t know. He only knows that this visit was a turning point for him.

He was told about the income generating skills training courses that were on offer. He heard about the computer skills and he just knew that he desperately needed this skill in order for him to finish his book and to have it published.

As luck would have it, soon after he applied to Zikulise for assistance, he was selected to attend a sponsored computer course. He instinctively knew that his life was taking a turn for the better. The very next day, after he had completed the course, he purchased a computer and began typing up his story! Senzo says with enthusiasm, “Zikulise gave me the skills and drive to pursue my dream”!

After his book was completed and published, he says that a heavy weight was lifted as he could share his story and experiences of his incarceration. Through his writing he hopes others will learn from his mistakes and not have to experience the harsh reality of having to spend time in prison.

Senzo went on to attend a business skills course at Zikulise that was, he says, of tremendous value to him. In particular the course helped him to navigate the intricacies of doing business with the banks, publishers and marketing his book!

In order to improve his writing skills, Senzo has attended a creative writing course and next year he says he is planning to attend a course on self-publishing.

As for his dream, he plans to take it a step further. Armed with the knowledge he has gained from Zikulise he hopes to open his own printing business and bookshop.

“Zikulise has helped me so much. I will always be very grateful for the skills, assistance and advice I received and continue to receive from them,” he said.

Senzo is in the process of completing his second book and he hopes to publish it himself.

Mthokozisi Mthembu’s dream and greatest wish was to be a fashion designer, but he couldn’t even sew! Somehow though he just knew that, one day, his dream would become a reality.

From acquaintances he heard about the Zikulise Community Upliftment Project and that sewing skill courses were offered to individuals who were unemployed.

Mthoko, as he is known by his friends and hails from the Kwahlaza Reserve, grasped the opportunity, walked into the Zikulise skills training centre in Empangeni, filled in an application form and the rest is history.

Fortunately sponsorship was available for him and he was accepted to participate in a sewing course in 2013. The first brick was in place and the foundation was laid. Why a brick is mentioned is that, after leaving school, he initially worked with his brother in the building industry. However, this was not where he saw himself – bricklaying was simply not for him!

During the course he discovered that indeed, sewing and dress making was in his blood, just as he knew it would be. He excelled proving to have a natural talent. Being the only male in the class didn’t make any difference to him. “In fact”, he said, “I showed the ladies how to solve a complicated sewing problem!”

After successfully completing the course, Mthoko was snapped up by a local manufacturing company and was employed at the business for two years. But he wanted to start his own business and this is exactly what he has done. He saved up sufficient funds to buy two sewing machines, found premises in Empangeni and in November 2015 he was open for business. He has since bought additional sewing machines as well as an embroidery machine.

“I never turn away a customer. Whether it is a complicated wedding dress or traditional attire, a simple skirt and top, some linen or even a T-shirt I jump at the opportunity to satisfy my customer’s sewing needs”. In addition to the sewing, he also adds beadwork, embroidery and if the customer wishes beaded earrings and bracelets to match their outfit, these he produces as well.

He says that through the success of his business he has also been able to financially assist his parents as well as some families that are struggling in his area. He is so passionate about sewing and oozes enthusiasm when talking about his business. With a broad smile on his face, he says, “I love to sew, it is my life”.

Mthoko commented that just as he was given the opportunity through Zikulise, he too wants to assist individuals in his community who are as passionate about sewing as he is. He says he has taught six people thus far. “I am so proud that two of my students are in formal employment now”.

“Without the opportunity Zikulise afforded me I wouldn’t be where I am today. I have achieved so much in the past three years and I know I will continue on this path of success. Who knows maybe one day I will be designing outfits for movie stars!” he said.

Mthoko’s said, “My advice is, if you have passion, determination and always pursue your dream, you can make it happen. Look at me, I have.” 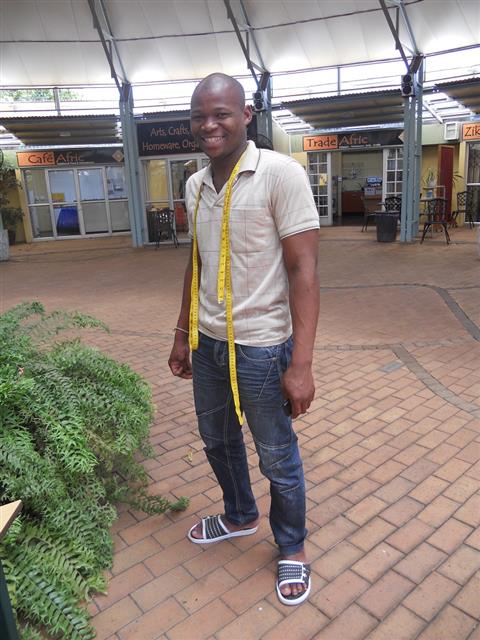 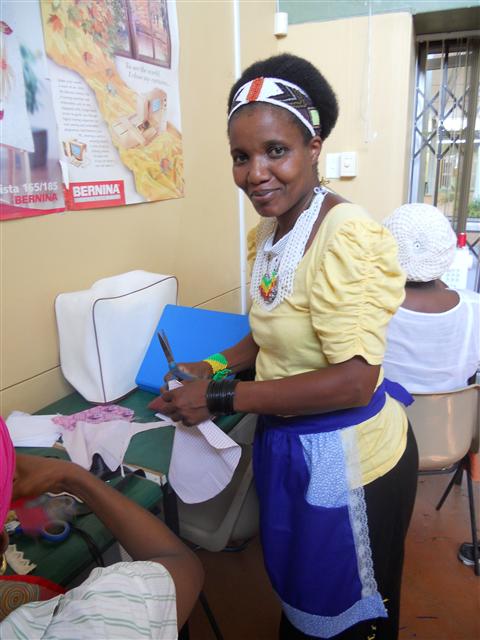 While enduring a life of unemployment and five children to support, she decided that things needed to change.

“My dream is to have my own clothing shop one day and to teach others in my community how to sew.” A friend told her about the sewing training courses offered at Zikulise and she took the opportunity to apply. She was subsequently selected to participate in a 15-day course that commenced in March 2012. During the course it was evident that she possessed a natural ability and because of her skill, dedication and enthusiasm was selected as one of the top three trainees in her class. As a result she received one of the brand new sewing machines that had been donated to Zikulise by Unilever. This set her on her path to success. Armed with her new found skill, her new machine and sheer determination Jane started her business by making clothing and selling to her community. “I sew many types of clothing, traditional address, skirts, men’s clothing, anything that the customer wants”.

Her services are now in high demand and she cannot keep up with the orders, so she in turn has become an employer teaching her unemployed daughter and cousin how to sew for her business.

With income received from her sales she has purchased a second sewing machine. ”I am so grateful to Zikulise for the opportunity that they have given me. Before I had nothing, now I have my own business! They even assist us with free monthly workshops to enable us to grow our businesses and be exposed to new ideas including more business skills. After attending a workshop on school uniform making I have added to my range and a whole new market has opened up for me”, says Sikhakane. She expresses her heartfelt gratitude for the gift she has been given in being offered training at no cost to herself, made possible through the generous sponsorship of business.

Jane is now well on her way to achieving her dream and Zikulise, together with its sponsors, wishes her all the success in the world.

“I am Sonto Ngema, a single mother from Mtshidi Reserve and because of Zikulise I have started my own business that I have called S4A Beading.

I did a course in public relations with funding that I got from the National Skills Fund but after my internship I couldn’t find employment so I stayed at my home doing nothing. I was so demotivated. But my luck changed when I saw the Zikulise Skills Training Centre sign on their buildings and then and there I decided to find out what Zikulise was all about. I saw that the non-profit organisation offered free income generating skills training to unemployed people and I immediately applied. I was taught traditional bead weaving, textile art and business skills.

I now LOVE beading! My business is growing! With the money that I earn from my business I can now put food on my table and I can support my children. I have so many orders! I am selling necklaces, ear-rings, beaded watches, beaded shoes, traditional attire and much more. I’m even passing on my skills to others in my community by teaching them how to do beadwork. I am loving being able to give back to the community. 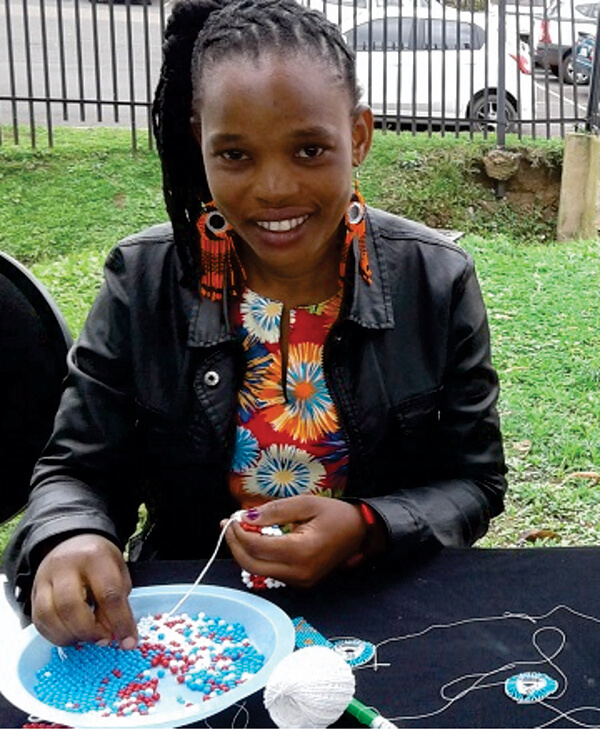 Who wouldn’t like to try a freshly baked muffin or those typically South African pink coconut covered delights aptly named Snowballs? Well, the place to sample these wares and other delectables is the NaweZifunze Disabled Association’s bakery in Mzingazi, a rural area near Richards Bay.

During 2016, ten unemployed disabled young women and men from NaweZifunze joined a baking and business skills class at Zikulise. Foskor, a local corporate who partnered with Zikulise, provided the funding and the transport and, as they say, the rest is history as we discovered during a recent site visit to Nawe. It was inspiring to see that the training provided by Zikulise had made such an impact and continued to have a long lasting effect. The management of Nawe, together with the beneficiaries of the programme had established a small retail outlet at the organisation’s premises from which they were selling their baked goods. 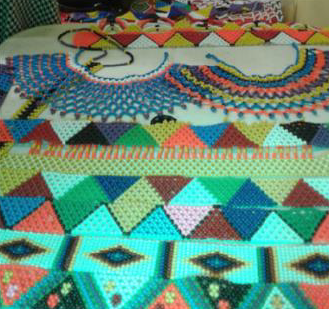 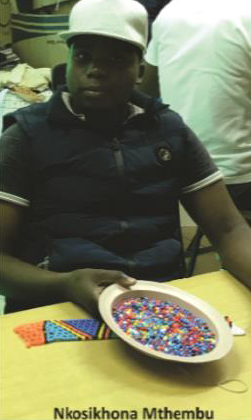 But the success story does not end there!

Not only are the baking trainees doing exceptionally well but several members who had attended bead-weaving and business courses at Zikulise in 2016 were in full swing beading traditional belts, necklaces and bracelets for orders. Nkosikhona Mthembu told us that he is so grateful to Zikulise for providing him with the opportunity. He said that his disability hindered him at first but now he beads beautiful things and he is so happy as his life has turned around!

We were told during our visit that those who had received income generating skills training are passing on their skills to other members at NaweZifunde. This fulfils one of Zikulise’s foremost objectives and that is to impact the whole community. Zulu traditional bead weaving is a skill that is not as readily passed down from generation to generation as it was in the past, but now at NaweZifunze this skill is alive and well!

But there are even more successes!

In addition to the baking and beading training, and also in partnership with Foskor, eleven beneficiaries from Nawe Zifunde attended training in ceramics at Zikulise. During their training, that included a 3-month incubation phase, they produced beautiful traditional and contemporary ware. Sadia Bressan from Nawe Zifunde told us that they are in the process of establishing a pottery at their centre and that the building is currently under construction.
We will continue to follow their progress and offer a helping hand if needed. 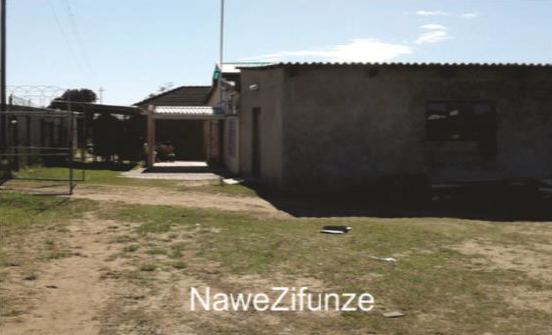